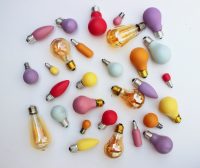 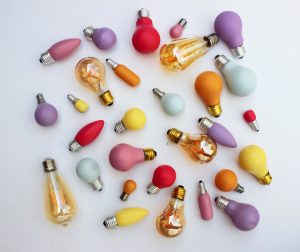 If you’re heavily involved in the industry, you’ll be familiar with all the lighting terms commonly used like Lumen and Kelvin but it can be a little overwhelming if you’re not “in the know” and need to buy home lighting or spec it for a project. So we’ve pulled together this “lighting lingo cheat sheet” to make life a little easier.

Lumen is the unit of measurement used for the luminous flux, this measures the amount of light that is emitted from the light source. In simple terms, the higher the lumen output is, the higher the actual light output will be.

Let’s put this into context, while the higher light output might sound like the best option, it really depends on where the lighting is to be installed….

For example if it is LEDs for your home, you should aim for a lower lumen as this will be a less intense light and more relaxing in a domestic setting. But if you’re lighting requirements relate to a work environment like a factory, for example, a higher lumen light should be your first choice. They are much stronger and can light up larger areas. This a great way to measure and reduce your costs.

This one causes a lot of confusion for people as with traditional bulbs the Watt became somewhat interchangeable with the measurement of the bulb.

What it actually refers to is the illumination term for power consumption. This means that the higher the Watt, the higher the level of power being consumed to light the bulb.

It’s important to keep this in mind when shopping for replacement bulbs, especially if your upgrading to LEDs. This is because LEDs are a much more energy efficient choice, so while the Watt level will be lower it doesn’t mean anything about the quality or strength of the light. By way of example a 7W LED downlight can correspond to a 50W halogen bulb.

Lumen per Watt (LPW or lm/W)

Now that we’ve covered the basics, lets see how Lumens and Watts work together….

This is measured by dividing the lumen output by the amount of Watt consumed by the given bulb. Basically this means that a high LPW is equal to an energy efficient light source.

It is important to be aware of the kelvin amount of your selected lighting in order to ensure the end result will offer the atmosphere you are hoping to create. So the cosy and intimate environment of a restaurant will require luminaires with a low amount of Kelvin. On the other hand, if you are looking for the correct lighting for a hospital, where it is important to have strong and clean lighting, you will want a luminaire with higher on the Kelvin scale.

The colour rendering index is the scale used to identify just how faithfully a light source will display the colours of objects in a room, in comparison to that of natural light. If this is something you are interested in, you should pay attention to the CRI which is on a scale from 0 to 100, the higher the number being the closest to that of natural light.

This is most important for rooms which will be used for colour-critical applications, such as art restoration or a surgical operating room.

The MacAdam scale which runs from 1 to 10, indicates the colour stability of a luminaire. The target value is 1, meaning that a high MacAdam rating is equivalent to an impure light. While the optimal rating is 1, it is almost impossible for the human eye to distinguish between the lighting of luminaires with a MacAdam rating of 3 or below.

While you may have come across this term, it is rarely something you will need to know great detail of. To put it simply, Candela is used to describe a light source’s luminosity in a given direction. It is also used to calculate the lumen output.

Lux is the measurement used to indicate the amount of light exposure to a given surface. This scale is dependent on both the size of the room and what is placed inside the room. This is important if your lighting project is for an office space. That’s because across Europe, there are specific regulations and a minimum lux requirement for office spaces.

Which brings us to another important factor - be sure to identify any relevant regulations, before making any major purchases.

If you work with LED Lighting, or want to know how to implement LED Lighting into your project, in line with the relevant regulations in Ireland and the UK, get in contact with us at Litho Circuits for more information.  We look forward to talking with you.