Cut your Costs with LED Lighting 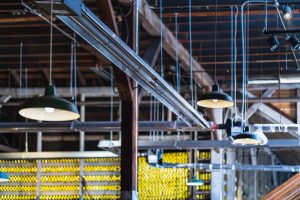 Finding ways to reduce your costs is always a hot topic in business, but perhaps now more so than ever! After months of quarantine and forced shutdowns, businesses are in need of cost saving measures as they steady the storm.

One simple and efficient way to save money - not just in the coming months but for years to come – is to make the switch to LED lighting solutions.

Not convinced? Let the facts speak for themselves…

When compared to electricity-hogging conventional HID systems, industrial LED fixtures merely sip energy. In fact, some of the highest-efficiency LED systems now on the market can reduce energy usage by up to 90%!

Just imagine how much savings you can make on your electricity bill! Especially in the case of factories that may have thousands of lights running around the clock…

Twice the Light, Half the Energy

Industrial LED fixtures deliver up to 60% more light output at the source, meaning that facilities get more lumens per watt with LEDs when compared to HPS and other HID lighting.

Not only are they stronger but LEDs can also be configured to direct the light exactly where it’s actually needed! – Like work spaces and critical areas. This means you can stop wasting your money paying for lights directed towards the walls, ceiling, and other unnecessary areas, resulting in over 30 percent more usable delivered light.

What this really means is that companies get more light where they actually need it, often using fewer fixtures, and ultimately get more bang for their buck!

Unlike HPS fixtures, which require an extended warmup period to arrive to full output, LED fixtures are instant-on, delivering full output the moment the switch is flipped. This enables industrial LED fixtures to be equipped with a wide range of energy and cost saving smart features!

Some such features include occupancy and daylight harvesting sensors, as well as programmed dimming and other configurable lighting schematics. Meaning you only use the lights when you actually need them and thanks to these smart controls you won’t even have to think twice about it.

This dramatically reduces burn time when compared to HPS lights - which are often left burning 24/7 to avoid the warmup - and can further cut energy use and cost by up to 50% per day.

While the replacement of lights isn’t often the first thing on people’s minds when it comes to the installation of lighting solutions, it certainly shouldn’t be an afterthought!

Conventional HPS bulbs fail as often as every 24,000 hours and even more frequently in high-vibration or other harsh environments, meaning there is a frequent need for changing out bulbs. This routine maintenance often requires the use of mechanical lifts, supplemental lighting and production shutdowns that can all add to a facility’s energy costs.

However high-performance industrial LED fixtures can last more than 100,000 hours, which can virtually eliminate lighting maintenance for up to 10 years or more! That means companies can avoid wasting the energy (and time and money) it takes to replace lamps.

If you work with LED Lighting, or want to know how to implement LED Lighting into your project, get in contact with us at Litho Circuits for more information.  We look forward to talking with you.